Christmas was Truly Magical When I was 7.

Everyone, you knew believed that Christmas was truly magical and could talk about nothing else but ‘what are you getting from Santa’ like it was a given.

And from September on, the excitement of this truly magical time started with the lovely aromas coming from the kitchen, with preparations of the Christmas cake and puddings.

The dried fruit was soaked in Brandy and mixed spices until it swelled to near bursting. The unforgettable smell of Christmas.

All of this going on in the kitchen while you listened to the Carol Singers chorus of beautiful Christmas hymns under the lamplight outside our door. The local choir sang every year in cold, hail and snow. They collected for the poor by 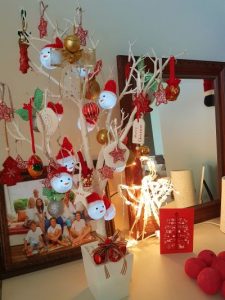 knocking on everyone’s door in the neighbourhood.

Santa made an appearance in the bigger department stores probably in early December. The shop windows were all decked out in toys and animated Disney characters like Cinderella, Snow White and the 7 Dwarfs to name but two.

Caves were created through the shops with coloured lights and fake snow, and all kinds of Christmas things going on. And more animated characters on both sides of the caves with songs and dances from the Disney films.

It was well worth the long queue to finally get to the entrance and truly a wonderland for kids to walk slowly wide-eyed through the cave and find Santa at the end with a present for all the kids.

In the cave, we handed Santa our long lists, which were always over the top. Our house would never have accommodated all the large bikes, prams, dolls, scooters etc on our lists, not to mention Santa getting them down our chimney. But all that was possible because it was magic after all.

Of course, you never got any of the outlandish stuff on your list for Santa. But you were always happy with the functional surprise presents at the ends of your bed.

One memorable year and we couldn’t get to sleep as usual. Our older brother called us younger ones over to the window to see Santa and his reindeers with a sleigh full of toys. All of us rushed over with eyes as big as saucers, only to be told, ‘too late he said you’ve missed him.’

But that too was a magical moment. You never got to sleep till all hours and then you were up again at dawn and straight into your parent’s bedroom to show off your Santa stuff. They seemed happy enough after being jolted out of their short precious sleep.

Catholics attended Mass every Sunday, and Christmas Mass was very special. The Christmas hymns were all sung in Latin, in fact, the entire mass was in Latin in those days. 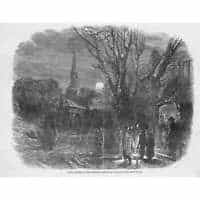 You couldn’t eat breakfast or anything else until after you’d received Holy Communion. But the real excitement was getting home to play with your toys, never mind breakfast. And when mass was over you couldn’t see our heels for dust.

Christmas eve and Christmas day the aromas were everywhere. The smell of onion, sage and thyme stuffing. The turkey and ham cooking slowly, and the gravy, the roast potatoes sizzling in the oven.

Brussel sprouts and other greens, all this feast was washed down with lemonade, a once a year treat. Then came the sherry trifle with custard and cream, and OMG the steamed pudding that was lit up when topped with brandy. All

delicious but you could hardly move, you were so full.

Late in the afternoon, Dad insisted on walking us quite a distance to our uncle’s house. We loved this as we got more lemonade, special chocolates and biscuits made only for Christmas time. So many treats in one day.

Boxing Day, or St, Stephen’s Day as we knew it, we all trouped over for a party at our Nana’s small house. Here, we had to eat plates of fruit before any treats were served.

Dad’s brother, his wife and their brood of 7 children also squashed into Nana’s house, 15 children in all. Our Mum stayed home for a well-earned rest.

Our cousin lived with our Nana because her Dad had died and her Mum had to go back to work. She was an only child who seemed to have every toy you could wish for, so we all envied her. We thought she was the luckiest thing. But she was loving and kind and didn’t mind sharing her toys with us.

Years later, during a conversation over a coffee, my cousin described her feelings of loneliness as she stood in the window waving goodbye to us as we left with our parents and siblings.

However, she had a most loving relationship with our grandmother, who was really like a mother to her. I’m always so pleased that they shared a very happy life together, a long one at that, as our grandmother lived to the ripe old age of 96, with all her brain cells intact I’m happy to say.

My lovely cousin married and has her own 2 beautiful girls and granddaughter. She now lives in Los Angeles beside one of her girls, and her husband. They all have a very close relationship and regularly get together there or across the pond.

My Beautiful Cousin Has Passed On

And now, with a very heavy heart, I have to tell you that my beautiful cousin has died after a very short illness (not Covid). She didn’t get to enjoy Christmas as she had always done with gusto, with her precious girls beside her. Because of Covid only one of her daughters was able to be with her when she passed peacefully on December 27th. But I have no doubt that she is resting in peace with her beloved grandmother.