People were lighthearted when I was 7. Or so it seemed, even though most families had much less material stuff. And my mother worked very hard for her family of 7 children.

Between knitting pullovers and jumpers for the boys and cardigans for us girls, I just marvel at where she got the time to sew and crochet as well.

She had an old fashioned Singer sewing machine that sat on a wrought iron stand with a foot pedal. With this sewing machine she made simple, summer dresses for me and my sisters. 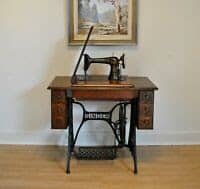 I’ve often wondered where it disappeared to. I’d love to have it now. But my mother wasn’t one for holding on to things once they’d come to their use by date, so to speak.

So, she would trade in the old for a newer model and the same probably happened with that lovely antique sewing machine.

I well remember our hand washing machine, none of your automatics back then. It had a wringer comprising of 2 heavy rolls with a handle. When all the Persil was rinsed by hand under the tap,  my mother then put them through this wringer to squeeze out the surplus water.

As there was no such thing as paper tissues at the time, cloth hankies were the norm.  However, a big iron basin was used for one purpose only, boiling the hankies and cloth nappies, though not together.

And everything was ironed. As we girls got older we had to help with this, and other chores around the house. Having said how hard my mother worked, she also took time out for herself. She was quite emancipated really.

While my father had his camera club every Tuesday evening, his hobby occupied a great deal of his spare time.

So, on most Saturdays Mam went shopping in town, met some of her single girlfriends, all had tea and then went to the cinema. Dad looked after us kids for the day.

On Wednesday afternoons a cleaning lady called Maureen came to clean our house and baby-sit while Mam took off into town again.

Maureen always arrived like Mary Poppins with a big black bag from where she took a brown paper bag full of broken biscuits. A big treat for us, she allowed us to eat as many as we liked. She was great fun and we just loved her.

Swimming Lessons At The Baths

My older sister and I were sent to evening swimming classes in winter time. Known as “The Baths”, the heated indoor pool was a bus ride to town.

Something else I can hardly imagine now is that we 2 young girls aged about 10 and 12 years took ourselves on the bus into town for the early evening lessons. I can still smell the chlorine.

I think the lessons lasted 30 minutes, and it was quite dark before and after our class. Many times we decided to spend the bus fare on toffee sweets and walk home. We could hardly wait for our after swim treat.

Our walk home was about 30 minutes, and we never got in trouble because it was quicker than waiting for the bus, which also stopped at every bus stop.

We were not aware of any dangers, and nobody ever approached us. Was it a safer world then! I shudder to think of it now.

I don’t remember many birthday parties, but we certainly did not feel deprived. Treats were occasional and as good as any party.

Before we acquired a phone, me and my sister, the same one, we were inseparable, often had to deliver messages from my mother to my father at his office in town.

My memories are of a big foyer, with a high curved reception desk and 2 lovely ladies manning it. Sometimes they treated us to yummy sweets while we waited for Dad to appear.

When we were much older we often wondered what was in those important messages. Must have been good news because he would then take us to Bewley’s Oriental Cafe next door.

Sitting in this lovely old restaurant Dad ordered the most delicious almond and cherry buns, baked only  at Bewleys, and so they became known as ‘Bewley’s Buns’.

«Enjoyed this post? Never miss out on future posts by following us» where «following us» is a link to https://follow.it/kcollierpro?action=followPub.